Great news! Hovershow 2017 dates are confirmed.  Please see the poster below.  We hope to see you there! 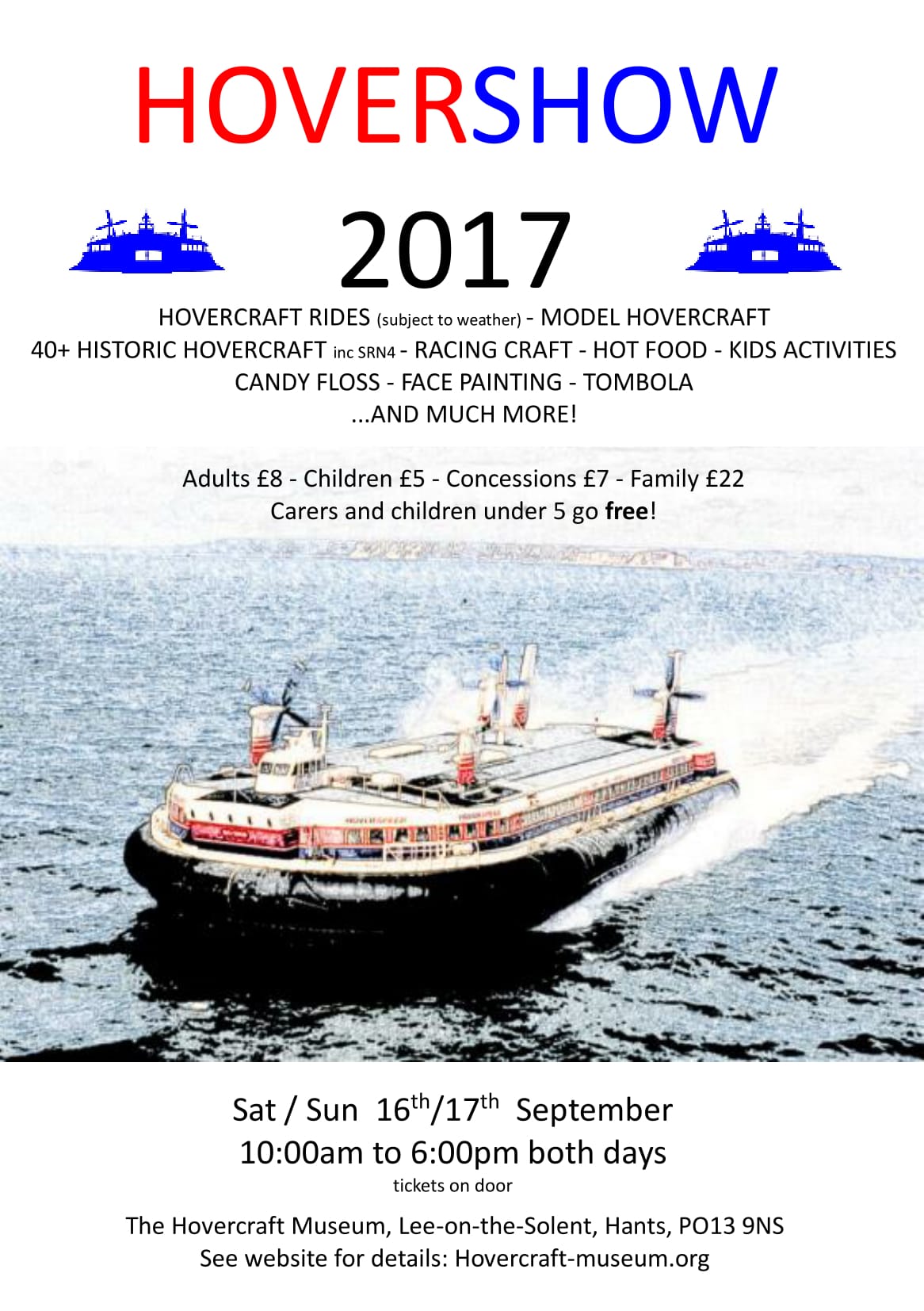 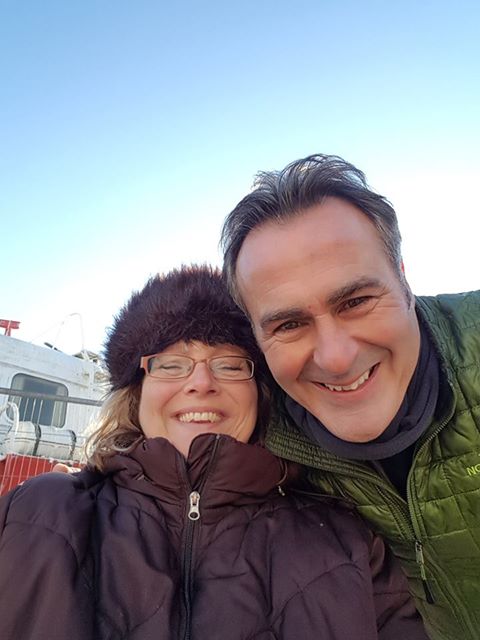 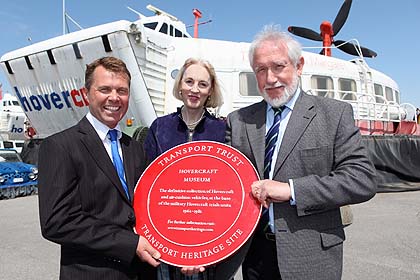 The Hovercraft Museum Trust is currently looking to recruit for two roles:  Operations Manager and SR.N4 Project Manager.  If any of these roles seem interesting then please visit our vacancies page.  Anyone is welcome to apply, and knowledge of Hovercraft is not a necessity!  Both positions will be closing for applications on the 31st October 2016.  Good luck to all applying!

Hovershow 2016 is officially open! Due to the weather we’ve had to cancel the ride elements of the show, but the SRN4 IS OPEN. We’re not going to let a bit of weather ruin our fun!

SRN4 “The Princess Anne” saved for the Nation!

The Hovercraft Museum Trust is delighted to announce that they have been successful in securing the future of SRN4 “The Princess Anne”.

We are also absolutely delighted to announce we will partially open the craft to the public at the Hovershow next weekend!!!

We have worked very closely with our landlord, the Homes & Communities Agency to land an initial three-year lease (at peppercorn rent) with the intention of the HCA to hand the craft over completely to the Trust at the end of the 3 years.

This time, period allows us to fulfil obligations in making the craft safe and of smart appearance.

We would like to thank the team at HCA, the 23,000 signatories to our petition and the support of the Museum’s local MP Caroline Dineage. There has been an awful lot of work going on behind the scenes.

Special thanks also go to our hardworking team of volunteers and trustees who have managed the campaign and we would also like to thank Cliff Valize-Jones for setting up the Save the SRN4 Facebook group which massively raised our profile.

The real work starts now, though – volunteers to undertake work on her please get in touch!

Wednesday this week we will drop the bow ramp to allow access for volunteers to prep part of the craft for public access but we have a huge job list to do before the craft is fully open and accessible.

Also, share and support our fundraising page at www.gofundme.com/srn4hovercraft

Many thanks again for all your help and support.

Ben Avery
On Behalf of The Hovercraft Museum Trust

Built in 1969, “The Princess Anne” was the second of six giant hovercraft built in Cowes on the Isle of Wight. She operated as a ferry and after being stretched in 1978 she, along with sister craft “The Princess Margaret”, became the world’s largest commercial hovercraft operating between Dover, UK and Calais in France. They were soon nick-named the “Super 4’s”. Capable of carrying 427 passengers and up to 60 cars her service speed was 65 Knots (approximately 75mph).

An average journey would take 30 minutes and she could handle sea conditions of up to 3.5m significant wave height and mean winds of 50 knots. “The Princess Anne” to this day still holds the Guinness Record as the world’s fastest ferry with a crossing time of just 22 minutes in 1997!

After 33 years of service both surviving craft were retired and moved here to Lee-on-the-Solent for storage pending onward sale. In 2005 a private buyer came forward and purchased the craft mainly for engine spares and they have sat here ever since. Despite having permission in the past to occasionally open them to the public, the Museum has been unable to carry out any preventative maintenance work to either craft and has up until this point been helpless.

Finally, in early 2016, ownership transferred to the Homes & Communities Agency (HCA) who are the owners of the Daedalus site. When this happened, thee future for these two giants was uncertain and the Hovercraft Museum launched a high profile campaign to save one of the craft from scrap. Over 22,000 people signed the petition – they, like us, felt that a truly wonderful and unique piece of British maritime heritage was about to be lost forever.

We are still in negotiations with the HCA which will hopefully lead to an initial 3-year lease for the Hovercraft Museum in which time we have to stabilise the structure and make the craft presentable. After this period, it would be the intention of the HCA to hand over ownership to the Museum.

Why Are We Only Saving One Craft?

The decision was taken very early on by the trust to focus on saving one of the two craft. We have over 65 other hovercraft in the collection and we are a relatively small group of dedicated volunteers and enthusiasts. We receive no funding at all as we lease the site the Museum is based on and we are completely independent.

We rely on donations and money received through the ticket office. At 54 x 27m the SRN4 is enormous and to look after two of these machines is beyond our limited budget. We also have to consider the bigger picture and fit in with the redevelopment of the Daedalus site which is primarily happening to create new jobs.

After surveying both craft it soon became apparent the craft in the best structural condition is “The Princess Anne” and she will give us the best basis for a long term exhibit here.

What is Our Plan for the Craft?

“The Princess Anne” will become our flagship exhibit here at the Hovercraft Museum. She will be used to tell the story of how in the white-heat of technology development in the 1960’s, and less than 10 years since the first hovercraft was built, Britain built the Concorde of the Sea.

As much as we would love to see her back on the water, modern regulations make restoring the craft to a seaworthy and Coast Guard compliant state prohibitively expensive (let alone maintenance and operating costs!) We also have other craft we would like to put back to work on the water that will be more practical for regular pleasure rides in the near future.

We will stabilise the structure, seal the roof, re-instate the world’s largest diameter propellers and re-paint her into her glorious red, white and blue livery from 1978. The vast car deck will be used as additional exhibition space and will be available for private function hire as well. One side cabin will be kept in original specification, ‘as in service’ whilst the other will be re-configured in order to help us tell the SRN4 story with displays and videos. All this work will need many hands as well as kind donations from the public!

If you would like to help us on this project (no practical experience necessary), whether it be cleaning, painting, electrical, woodwork or metalwork, please speak to any of our volunteers here today or email us at enquiries@hovercraft-museum.org