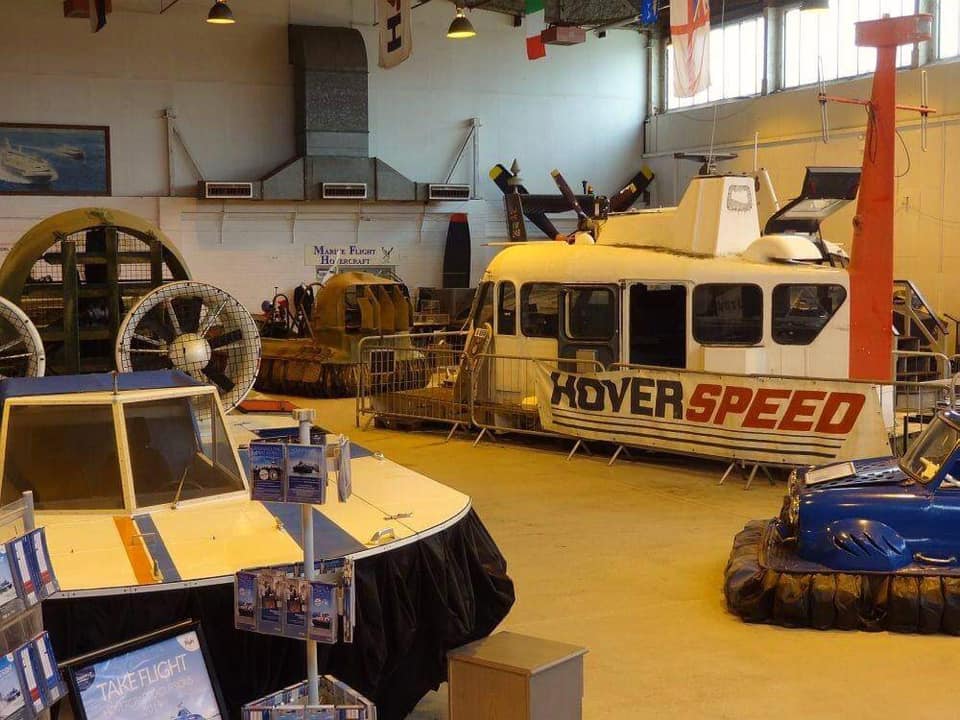 Here at the Hovercraft Museum, we have lots of things to do and see. The Hovercraft Museum is a working museum and is constantly restoring, preserving and maintaining the craft in our care. Our engineering hangar is open to visitors to see the craft being worked on and many of our craft such as The Princess Anne, BH7, SRN5, and SRN6s can be boarded and experienced first hand! We have over 55 craft in the collection at present and here are just some of the highlights:

The SR.N4 (Saunders-Roe Nautical 4), or Mountbatten class hovercraft, is the largest commercial hovercraft ever built and served for over 33 years as a fast cross-channel ferry between Dover, UK and Calais, France. After the mk3 upgrades to the craft in 1976, becoming ‘Super 4’, she was able to carry up to 60 cars and 400+ passengers.  To this day ‘The Princess Anne’ holds the Guinness World Record for the fastest car-carrying commercial channel crossing at an impressive time of 22 minutes, set in September 1993. Regular crossing times in the Chanel were 35 minutes, with average speeds of 65kts!

Measuring 54 meters in length and registered at 311GT, the craft was powered by 4 x Rolls Royce Proteus gas turbine engines, developing 3400HP each. These turned the worlds largest air-screw propellers, a massive 21 feet in diameter.

After retirement from service in October 2000, she was stored at Lee-on-the Solent alongside her sister, ‘The Princess Margaret’ and put up for sale. Both craft were bought by a private individual in 2005 and sat deteriorating on our site for over a decade. It was 16 frustrating years for the Museum before we were finally able to secure a lease on the craft from her new owners, Homes England (formerly the Homes & Communities Agency) who own our site. ‘The Princess Margaret’ was removed from site in 2016 for recycling but this enabled the Museum to secure many spares to make ‘Anne’ a complete looking craft.

In 2016 the Museum secured the ‘Anne’ onto the National Historic Ships register and in 2019 HRH The Princess Royal visited her namesake to commemorate 50 years since the craft was in service. 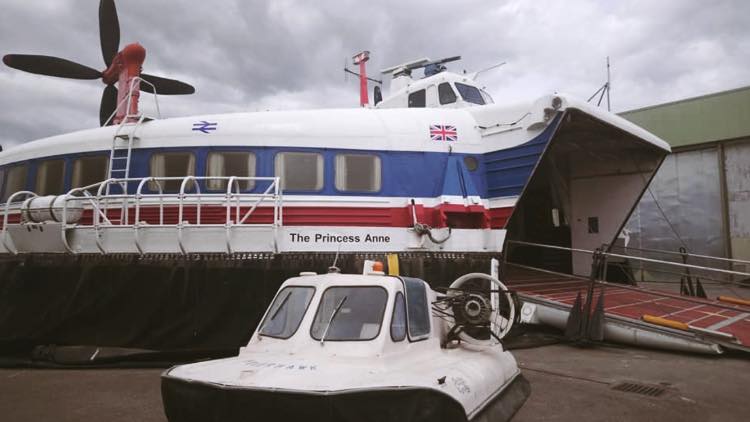 Designed by British Hovercraft Corporation and built by Westland Aerospace at East Cowes on the Isle of Wight, this was the last BHC/Westland hovercraft to be built in 1991 (AP1-88 production then moved to Hoverwork Ltd). The craft, then named ‘Siverko’, was moved to St Helens and fitted out internally by Hoverwork as 68 passengers seats for a service in Russia that ran a 2-3 day route from Arkhangelsk. After being sold to Hoverlines International Ltd (HIL) she had modifications made to the forward cabin and saw service in the Bahamas and South America before returning to the UK.

The Museum acquired ‘Falcon’ in 2019 when she was arrived by sea under tow from Southampton as a kind donation from HIL and with support from Griffon Hoverwork Ltd. She is 1 of 14 AP1-88 type craft built (the designation AP stands for ‘Advanced Project). These craft also saw service on the Solent at Hovertravel Ltd and are still in service with the Canadian Coastguard. ‘Falcon’ can still be hovered, although is not currently seaworthy. More details can be found on her Facebook page ap188preservation 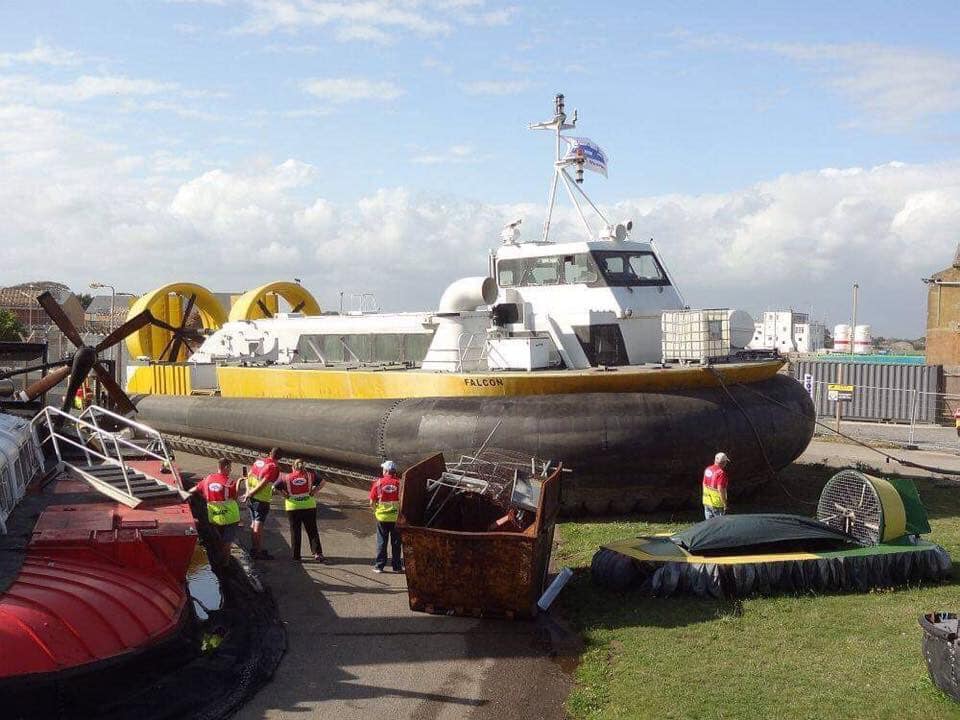 The BH7, or Wellington class hovercraft, was designed for military applications. Built by British Hovercraft Corporation at their Woolston works, the first flew in 1969 and was used in many trials with the Royal Navy and as a part of the Interservice Hovercraft Trials Unit, that was based at HMS Daedalus, lee-on-the-Solent (home of the Hovercraft Museum now).

During the 13 years of tests, it was evaluated for many different roles including, anti-submarine warfare and mine countermeasures.  Most notably, one winter, our BH7 successfully completed a round trip to The Arctic Circle leaving from Lee-on-the-Solent when it served with the Royal Navy. The craft also travelled (by ship) to the USA and was demonstrated all along the Eastern seaboard including in New York harbour.

BH7 arrived at the Museum after being donated by Westlands in 1989 and was included onto the National Historic Ships register in 2019. 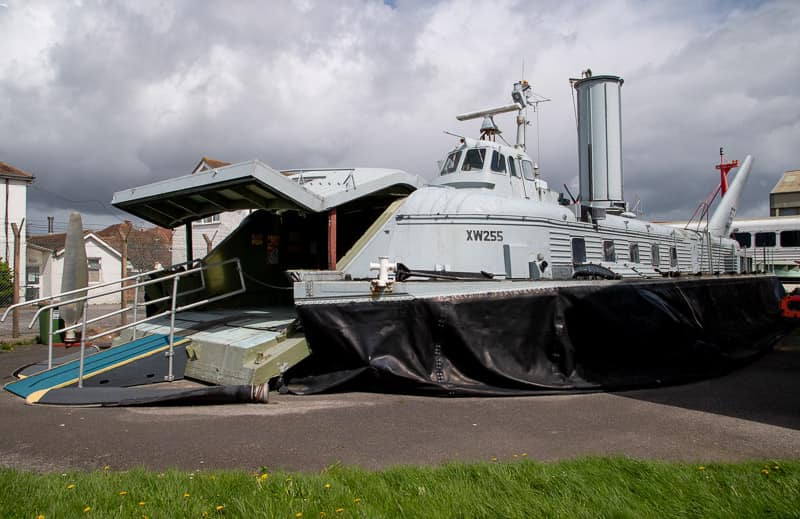 The 2002 James Bond film “Die Another Day” featuring Pierce Brosnan and Halle Berry had hovercraft in the opening chase sequence as James Bond escapes through a North Korean minefield (also known as Aldershot!).

Several Osprey 5’s and a Slingsby SAH 2200 were used, with Griffon Hovercraft Ltd providing pilots and pilot instructors.  One of each craft used in the film can be found on display here at the museum, alongside a multimedia presentation about the filming of the hovercraft chase. 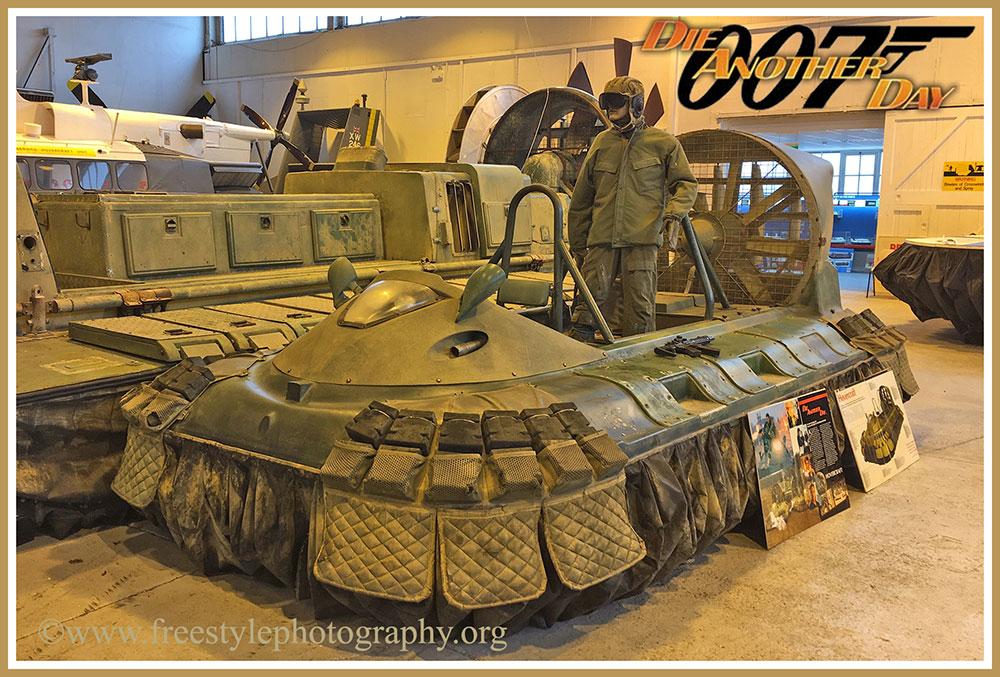 A home-built craft by members of The Hover Club of Great Britain, ‘Hover Mini’ is a great fun craft! Thrust power is from a Citroen 2CV engine, while lift power is from a Briggs & Stratton 15HP lawnmower engine. 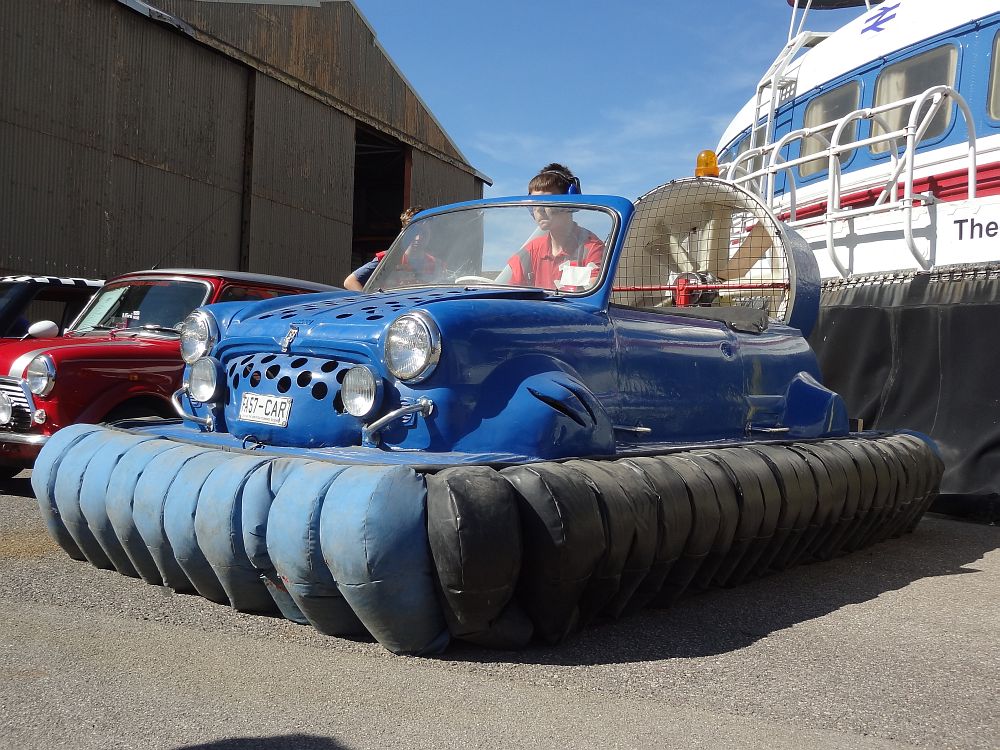 This vessel is an SRN5 or Warden Class Hovercraft that was built in 1963 and launched on 17 November 1964. It There were only 14 such craft built, and they were the very first production hovercraft in the world. This particular one (006) is the last remaining British built SRN5 in the UK. She had 18 seats and the most powerful power-to-weight ratio of any hovercraft. Her design led directly to the larger SRN6 with the same engine but with 38 seats. This was the first of the ‘modern’ hovercraft. SRN5 (006) was used extensively to showcase the hovercraft in numerous countries and even to NATO. In 1966, whilst carrying out a demonstration at Auckland airport in New Zealand, she interrupted the demonstration to rescue a parachutist who had landed in the sea. In the same year she appeared in British Hovercraft Corporation (BHC) colours at the Hovershow at Browndown.

In 1968 she was purchased by the Interservice Hovercraft Unit (IHU)based at HMS Daedalus, and she stayed there until 1974 doing experimental work. She had dual controls fitted, and over 50 pilots were trained in her, many from the Army Hovercraft Unit based at Browndown. She was used to survey landing sites to be used in the event of a major collision or fire at sea. She also played an important role in the evaluation of the Optical Navigation Aid, which assisted the navigator to identify navigation marks. In 1969 she was deployed to investigate refuelling techniques from a ship. In 1971 she took part in an exercise with the assault ship HMS Fearless to assess docking manoeuvres. In 1974 she was purchased by Hoverwork for use on the Wash in the building of a reservoir. In 2013 she received a Engineering Heritage Award from the Institute of Mechanical Engineers. 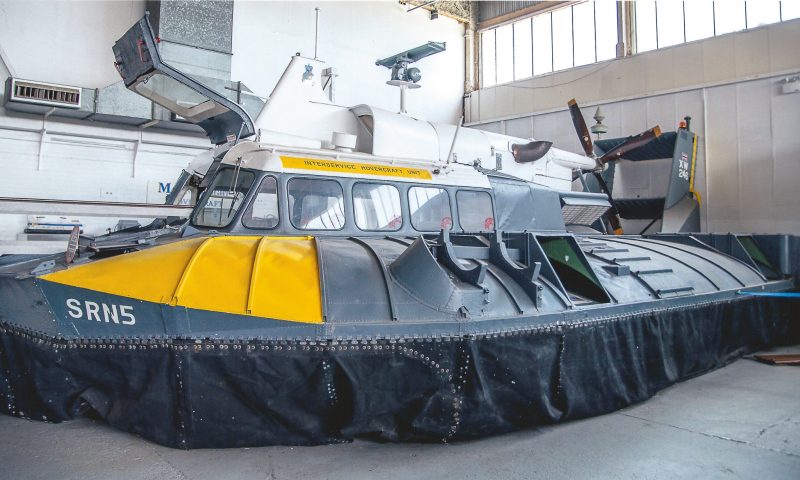 The craft was first launched in 1966 as a single propeller Mark 1 SRN6 hovercraft, built by Saunders Roe at East Cowes. The craft is powered by a single Rolls Royce ‘Gnome’ Gas Turbine engine, developing 1400HP. She was originally used as part of Hoverlloyd’s operations. Initially named ‘SURE’, she lost that name to the SRN4 which replaced her. In 1968 she collided with SRN6 (016) at low tide at Cowes, but sustained only minor damage. At the end of 1968 she was sold to Pacific Hovercraft in Canada, and worked on the new passenger service from Vancouver to Vancouver Island. This service ceased in 1969, and she then carried out a seismic survey in the Beaufort Sea.

After Pacific Hovercraft went into receivership in 1971 she returned to British Hovercraft Corporation (BHC) at Cowes in 1972. She was stretched and converted into the first SRN6 Mark 6 Twin Prop hovercraft, with an added length of 9ft 8in. The single 9ft propeller was removed and replaced with 2 x 10ft propellers. The tail unit was modified and the top elevator extended. This created the ‘Super 6’ model as she is today. In September 1973 was officially launched as the SRN6 Mark 6. In 1976 she travelled under her own power to Amsterdam and back. Later in 1976 she was used by Seaspeed on the Cowes to Southampton passenger service (later Solent Seaspeed).

In 1981 she was involved in a mines counter measure trial at Portland. In 1989 she was sold to Belfatop in Belgium, and converted to carry out hydrographic survey work off Zeebrugge and was renamed ‘BEASAC III’ before being retired from service in 2002. In 2004 she was purchased by the Museum and travelled from Belgium to Lee-on-the-Solent under her own power. 2009 was her last trip to sea for the 50th Anniversary of the Hovercraft. 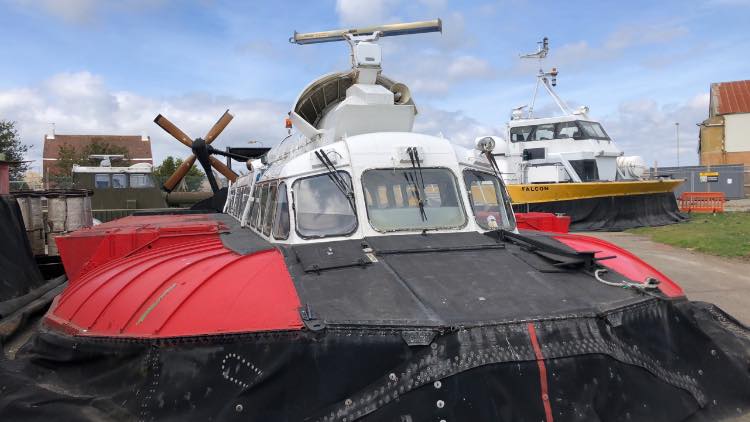 ‘C 22’ is a Griffon 2000TDX(M) built in 1993 for the Royal Marines 539 Assault Squadron. 1 of 4 craft built, it saw service in Iraq in 2003 before being retired in 2009 to make way for the newer generation of craft. The LCAC (Landing Craft Air Cushion) was also used on aid missions and on regular training exercises in Norway.

Powered by a single v8 air-cooled Deutz diesel engine, the craft can maintain 30kts with a 2 tonne payload and is transportable on a lorry, in a 40ft shipping container or by Hercules C-130 aircraft! 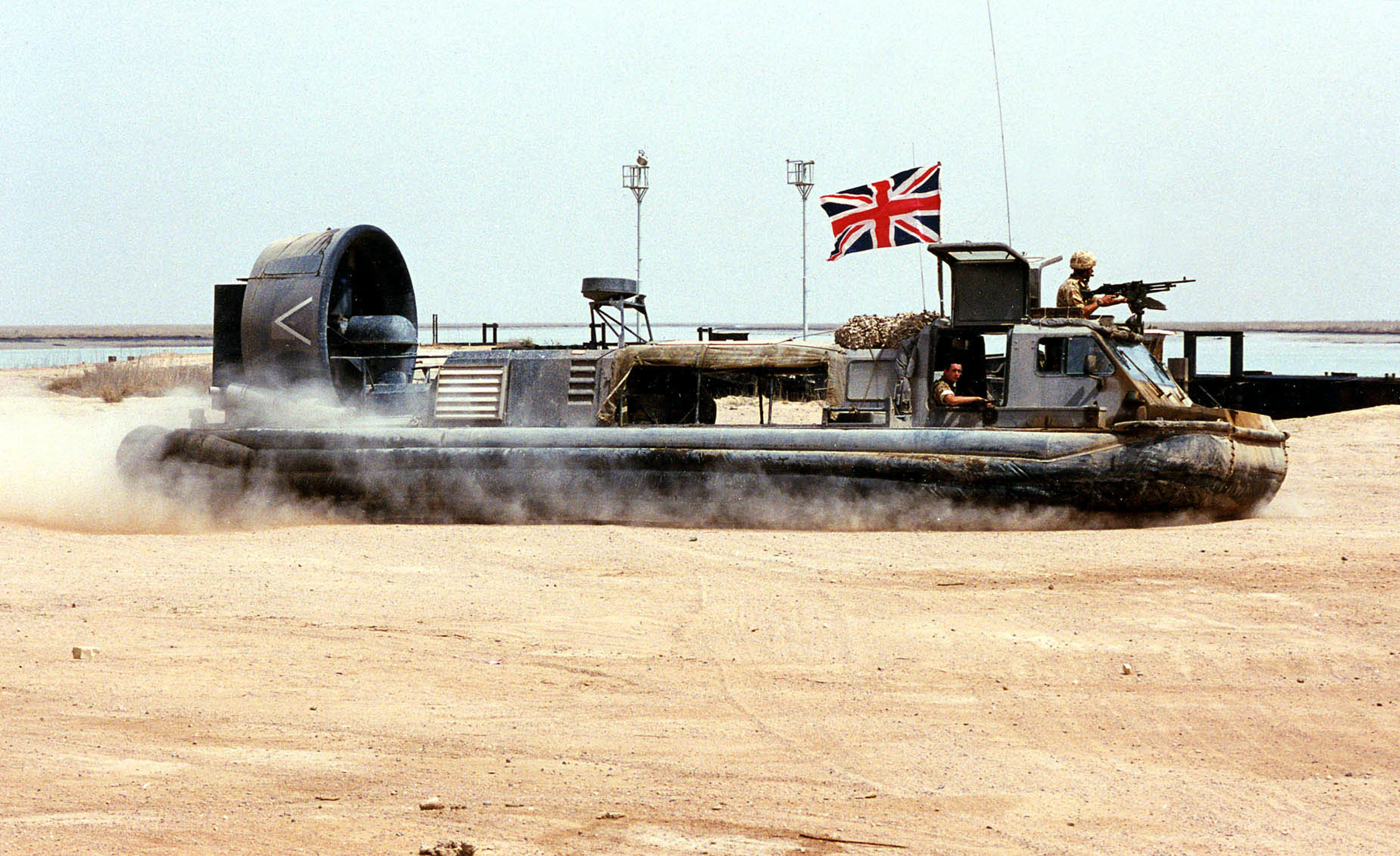 SEA HAWK was launched in March, 1965. She was the original prototype SRN6 Mk 1, the very first passenger SRN6 in the world, and the first hovercraft built for commercial operation. She was also the first SRN6 to be ‘stretched’,  and she is the only remaining SRN6 Mk 1S left in the world. She took part in the film ‘Murderer’s Row’ starring Dean Martin before joining the Solent service to the Isle of Wight. In 1971 she became the first hovercraft to be converted to an SRN6 Mk 1S, and in 1972 she was relaunched and became the first SRN6 Mk1S to be used in commercial service, for Seaspeed.

On conversion, she became 4 bays longer (9ft 8inches or 2.9m) than the standard SRN6, and she could carry 58 passengers, as opposed to 38 on the standard SRN6. In 1975 she operated a service between St Andrews and Carnoustie during the British Open Golf Championships, and in 1976 she took part in the Algiers Trade Fair. After 36,000 running hours she became the most used hovercraft in the world at the time. At the end of her service life she was initially donated to Southampton City Council before being passed to the Hovercraft Museum Trust, where she is now on display 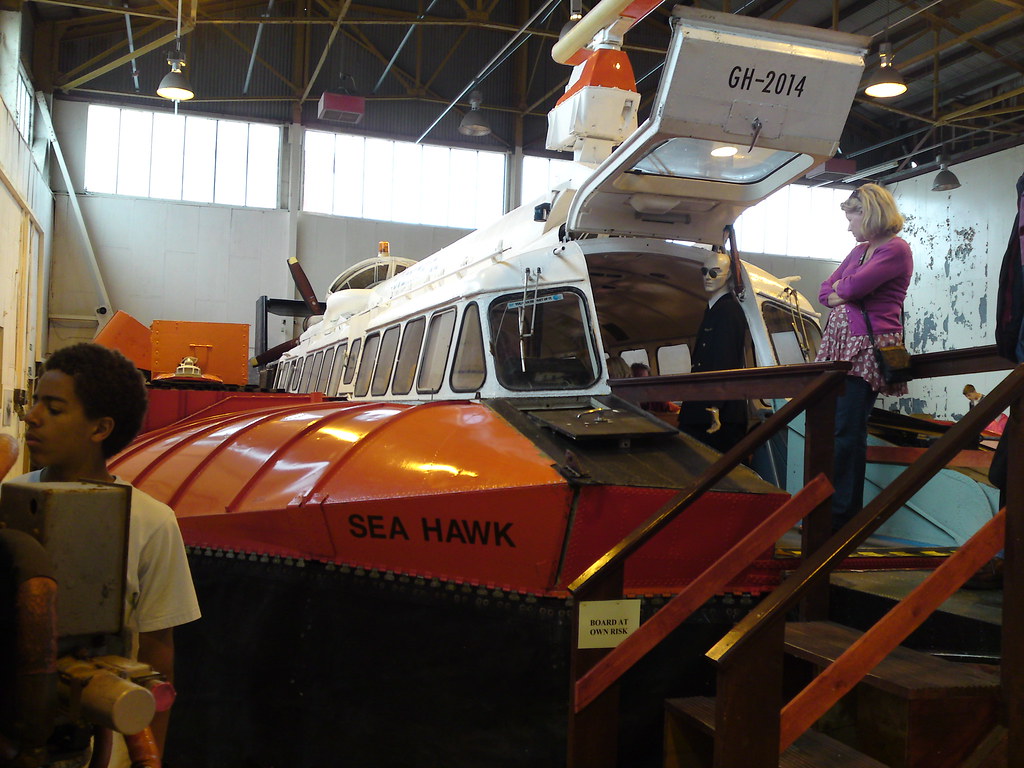 HD-2 was built in 1966 at Hythe, Hampshire by a company co-founded by Sir Christopher Cockerell, Hovercraft Development Ltd in association with the National Physical Laboratory and the National Research and Development Corporation. It was made to further evaluate hovercraft controls and skirt technology on hovercraft. This paved the way for a much more simpler and efficient skirt system that is still used on hovercraft today, the Open Loop and Segment skirt. 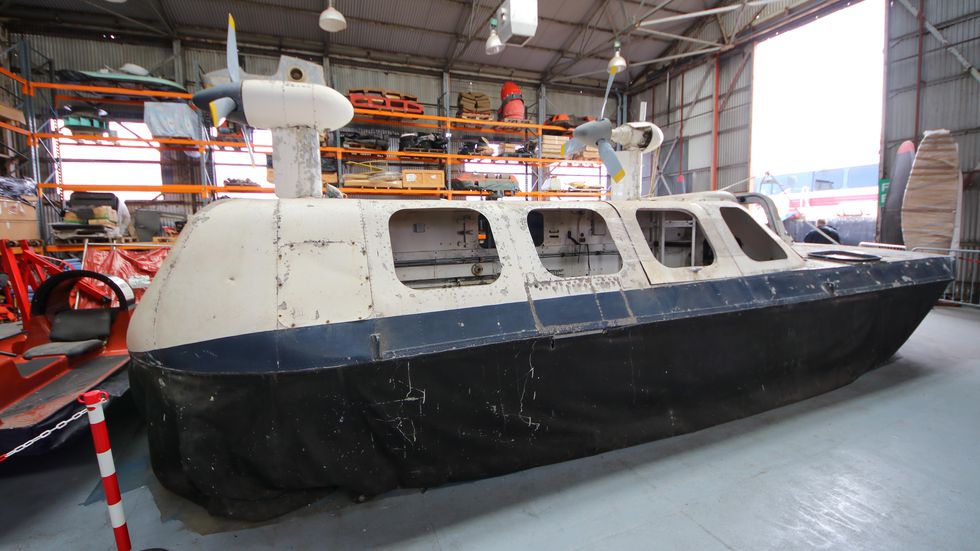